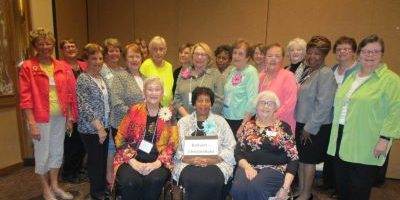 FOUNDING OF THE BRANCH
The Ballwin-Chesterfield Branch was founded in 1981 as the Lafayette Area Branch with 41 charter members and the plan to meet during the day.  We have grown steadily, averaging over 200 members.

PROGRAMS AND MEETINGS
At each branch meeting, the Program Committee is committed to presenting speakers on mission-based topics that capture the interest of our members, while focusing on the goals that reflect the mission statement of AAUW.  Diverse programs and speakers for topics related to social justice, health care, economic well being, diversity, gender and educational equity, human rights, international affairs, and public policy are featured.
In September, the branch hosts a complimentary Fall Welcome Brunch for the members and their guests. In December, a festive luncheon party raises funds to support branch activities.  The May meeting is a celebration/installation) luncheon, currently held at an area country club.  In July, members meet for a summer picnic potluck to meet new officers and renew acquaintances.

ACTIVITIES/NON-FUNDRAISING
Throughout the year, members participate in a variety of interest groups, such as  bridge groups, book groups, a Play Readers group, a Movie group, Creative Expressions, Out-to-Lunch, Genealogy and Golf.

ACTIVITIES – FUNDRAISING
Supporting the AAUW Fund and awarding local scholarships for mature women returning to college traditionally is an important part of branch efforts.  Our successful program, Dollars for Scholars, raises scholarship funds through member-sponsored activities. Through these efforts, money is contributed to the AAUW Fund, and scholarships are provided to women attending University of Missouri-St. Louis, Pierre Laclede Honors College at UMSL, and Maryville University.  In 2015-16, the branch began a “continuing book sales fair” to raise funds.  This successful project received a ten-star award from AAUW MO.

Ballwin-Chesterfield Branch supports the AAUW Fund through education and fundraising.  In 2008, the committee decided to emphasize Individual Giving, setting a goal of $25 or more from each member.  February and November were designated as Individual Giving months and participation has increased each year.  In addition Ballwin-Chesterfield sponsored successful Trivia Nights, which raised thousands of dollars for LAF.

COMMUNITY INVOLVEMENT
Under the leadership of the Issues and Diversity Committee, between 1997 and 2005, a series of Woman-to-Woman Dialogues on Social Justice were presented on topics such as Women’s Health, Economic Security, and Community Issues. Organizations such as Coalition of One Hundred Black Women and National Council of Negro Women co-sponsored these events and members from a wide range of metro women’s groups attended.

From 2005 through 2009, the Public Policy Committee organized public forums on such topics as Stem Cell Research, Immigration, and Financing Health Care.  Eight metro organizations acted as co-sponsors and sent members to the half-day events, which featured physicians, professors, attorneys, and other experts in fields related to the topics.  (These forums were awarded 21st Century and Galaxy awards from AAUWMO.)

PUBLICITY
Our newsletter, recipient of an AAUW Award, is published 10 times a year, and includes articles from the co- presidents and all major committees.

In addition to the branch newsletter and website, branch meetings and special events are publicized on social media sites and community publications.

STEM SUPPORT
In keeping with AAUW’s emphasis on STEM (Science, Technology, Engineering, and Mathematics) education and careers for girls and women, Ballwin-Chesterfield has long made STEM a focus.  Each year we award cash prizes to young women at the Greater St. Louis Science Fair.  For many years we have supported the Expanding Your Horizons (EYH) conference.  We provide registration scholarships for a number of middle school girls, and members serve on the board and assist at the conference.

In 2009, the branch received a $7,000 AAUW Community Action Grant. In the Each One Teach One grant project, members tutored small groups of sixth and seventh graders at Curtis Bishop Middle School (Wellston district) on science fair projects.  We helped sponsor a continuation of this project in 2010, contributing funds and workers.  Also in 2010, we continued our support of Wellston students and STEM by taking a group of girls to the Expanding Your Horizons Conference at SLU.

In addition, the branch sponsors the WHY So Few? Traveling Tool Kit, developed in 2010 by branch members.  It includes a 15-minute video directed at parents and teachers of elementary and middle school girls based on the AAUW publication Why So Few?.  It explains how to encourage interest in STEM and includes a parent brochure, “How to Raise a STEM Girl.”  In 2011, both the Why So Few? toolkit and the Each One Teach One project were finalists for the AAUW Breaking Through Barriers award.

AAUW CONNECTIONS
Ballwin-Chesterfield has been well represented by enthusiastic and sizable delegations to all state, regional, and national meetings from 1997 to the present. Members have served as officers and board members of AAUW MO. Julia Triplett held the office of AAUWMO President 2009-10.

BRANCH RECOGNITION
Since 2005, Ballwin-Chesterfield has frequently placed in the top ten branches nationally in total giving to AAUW and is consistently among the top contributors in Missouri.  From 1997 to 2000, we received the Five Star award for fulfilling the AAUW Mission in our state. In 2001 we were awarded the Seven Star designation.  From 2002 to the present, we have received the Ten Star designation, and the Galaxy Award.

NOTABLE CONTRIBUTORS
At the national level, Julia Triplett has served as Community Action Grants Panel Chair from 2005 to 2010.  When the 2009 National Convention was held in St. Louis, Patricia Shores and Julia Triplett served as Local Arrangements Committee chairs.  Many more members served as committee chairs, and volunteers to make the St. Louis national convention a huge success!  Twelve members were also financial sponsors of the convention. 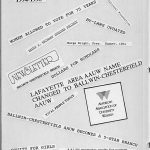 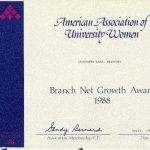 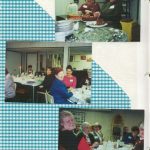